Posted at 20:54h in Technical Article by admin
0 Likes

What is A Vapor Corrosion Inhibitor?

VCI – Vapor Corrosion Inhibitor VCI provides anti-corrosive metal protection to address the corrosive nature of ferrous and non-ferrous metal products. A unique multi-metallic VCI concentrate for plastic and paper application. VCI is the environmentally preferred corrosion protection for metal components. VCI master batch can be blended with many polyethylene resins (LLDPE/LDPE/HDPE/PP) to form a broad range of anti-corrosion packaging systems.  Kraft paper can also be used as the carrier for VCI.

Why to Use VCI?

Worldwide corrosion costs industry and manufacturing approximately US $1.8 Trillion annually. VCI protects against corrosion and other environmental variables that are directly responsible for loss due to corrosion attack. 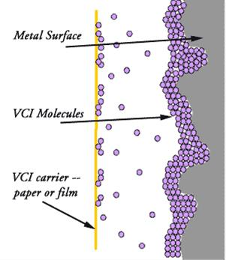 How Does VCI Work?

When VCI is incorporated into a polymer system or Kraft paper, the finished product offers corrosion protection by releasing vapors which form a monomolecular protective layer on the surface of the metal component to be protected. This protective layer remains until the package is opened and then evaporates leaving a clean metal surface that is free of corrosion.

VCI Protection is a Function of: 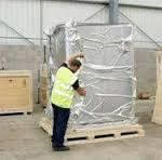